​The Excelsior Commons has a rich history as one of the oldest designated Commons areas in the country. The 13-acre parcel overlooking Gideon’s Bay and Excelsior Bay was originally set-aside as a “public ground” in 1854 in the original village plat, to be owned by the public in perpetuity. Through the years, the Commons evolved into a large neighborhood park and public recreation space that was used during all four seasons for a variety of activities.  As Excelsior evolved, the Commons remained a familiar public greenspace, home to a beach, lakefront park, baseball diamond, and sidewalk. Neighborhood festivals and annual events gravitated to the Commons as their natural focal point. For example, the large 4th of July celebration that is still a major regional attraction today can be traced as far back as 1870.

Over the years, the Commons has been adjacent to many other quasi-public spaces to create a regional draw that many generations have used. These spaces include a Pavillion, Amusement Park, charter cruises, and public boat docks, but historical photos suggest that the wide open lawn space, sandy swimming beach, and a tree-lined vista point have stayed relatively consistent over time. The baseball field has also been a mainstay, vintage images depict games being played there in the early 20th century.  The ball field still hosts several games per week during the summer months. Structures added during the latter part of the 20th century include a bandshell, bathhouse, restrooms, and concession area. While those structures have served as important amenities in past decades, they are also identified as features that would benefit from renewal in both an aesthetic as well as functional perspective.

​The enduring character of the Commons is what makes it special today and is also what causes Community for The Commons to be passionate about preserving and gradually improving the space. 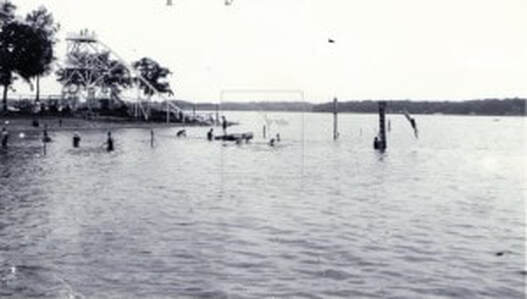